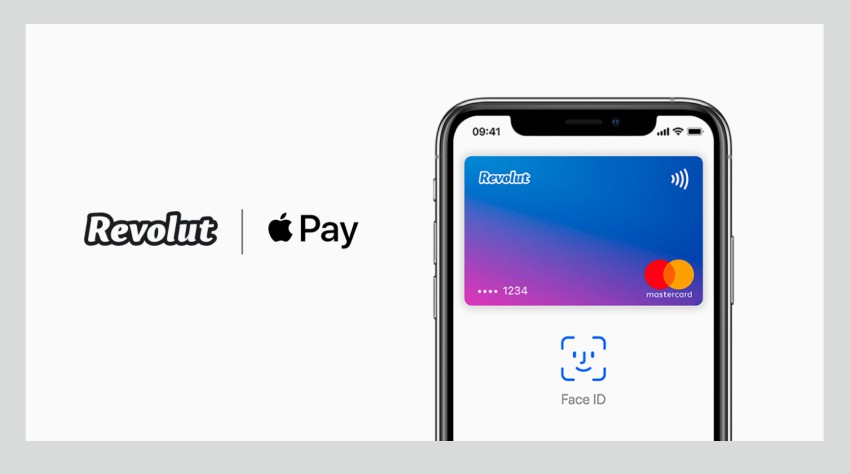 London, 11 June 2019 – Revolut, one of the fastest growing fintech companies in the world, today brings Apple Pay to its customers in the UK, France, Poland, Germany, Czech Republic, Spain, Italy, Switzerland, Ireland, Belgium, Austria, Sweden, Denmark, Norway, Finland and Iceland. With Apple Pay on iPhone, Apple Watch, iPad and Mac, Revolut customers can make fast and convenient purchases in stores, in apps and on websites.
Apple Pay provides Revolut customers with access to an easy, secure and private way to pay in stores, in-app and online via Apple devices. Payments with Apple Pay are faster than payments with traditional debit and credit cards or other payment methods and can be made contactless via iPhone, Apple Watch or Safari on MacBook Pro or MacBook Air with Touch ID, eliminating the need to search for a wallet.
Revolut customers can add their Revolut card to Apple Pay via the Revolut app or via the Wallet app. Also, customers without a plastic card can add a virtual card to Apple Wallet in just a few taps from the Revolut app and start spending instantly, without having to wait for the physical card to arrive in the post. This will enable new customers to sign up and begin spending with Apple Pay in minutes.
Security and privacy are at the core of Apple Pay. When you use a Revolut debit card with Apple Pay, the actual card numbers are not stored on the device, nor on Apple servers. Instead, a unique Device Account Number is assigned, encrypted and securely stored in the Secure Element on your device. Each transaction is authorized with a one-time unique dynamic security code.
Arthur Johanet, Product Owner for Card Payments at Revolut said:
“Revolut’s ultimate goal is to give our customers a useful tool to manage every aspect of their financial lives, and the ability to make payments quickly, conveniently and securely is vital to achieving this. Our customers have been requesting Apple Pay for a long time, so we are delighted to kick off our rollout, starting with our customers in 16 markets. This is a very positive step forward in enabling our customers to use their money in the way that they want to.”
Apple Pay is easy to set up and users will continue to receive all of the rewards and beneﬁts offered by Revolut’s cards.
With iPhone and Apple Watch, customers can pay with Apple Pay in stores, restaurants, taxis, vending machines and many more places. When shopping in apps or on the web in Safari with Apple Pay, there’s no need to manually fill out lengthy account forms or repeatedly type in shipping and billing information. Every Apple Pay purchase is authenticated with just a glance or a touch with Face ID or Touch ID, or a device’s passcode.

ABOUT REVOLUT
Revolut was launched in July 2015 by former Credit Suisse and Deutsche Bank investment bankers, Nik Storonsky and Vlad Yatsenko, as a digital alternative to the big banks. While the fintech initially drew in customers by letting them spend and transfer money abroad with the interbank exchange rate, the company has since attracted over 4.9 million customers in Europe with its spending overviews, budgeting controls, savings features and cryptocurrency exchange.
To date, Revolut has raised approximately $340 million in investments, from notable venture capital firms including Index Ventures, Ribbit Capital, Balderton Capital and DST Global.