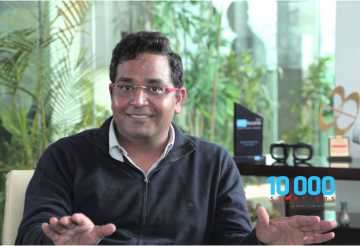 Vijay Shekhar Sharma most successful entrepreneur from India who is a Founder and CEO of One97 Communication/Paytm, which is one of the India’s leading mobile internet and mobile commerce companies. In 2014, Vijay Shekhar Sharma identified by most innovative CEO’s.
His journey of success starts from investing his mobile internet company’s One97 Mobility Fund. It is his keen interest and enthusiasm towards entrepreneurship, which makes a unique design. Sharma says” if he was not in his current role, he would have been singing along with Bono”.
Vijay Shekhar Sharma was grown up in Aligarh, Uttar Pradesh. At the early age of 13 Sharma finished his schooling which is before 2 years than required age. He was topper in his School. At the age of 15 he got admission in Engineering. He has completed his Engineering from Delhi College of Engineering. After completion of his graduation, he got a job with an average salary.
During college days Sharma with his classmate Harinder Takhar started their own small firm called “XS Corps”- a web solutions firm, offering web-guided services, including web directories, and was also a search engine. They received an offer from an individual Angel Investor, a New Mexico-based venture capital fund. In one year company creates a big turnover and then sold to “Living Media India” for half a million dollars Sharma also worked for companies like RiverRun Software Group (Business Development), Intersolutions India Pvt Ltd (Technical Team), India Today Group Online (Technical Head), and lastly Startec Global Systems, India (Chief Technical Officer).
Sharma realized while working with other companies he is missing his goal to create his own company which is something different from any other. He left his job and started to achieve his goal. He found that mobile company has the same capability over internet.
In 2000, Vijay and Rajive Shukla started One97 Communications Ltd. They stated One97 is a company that delivers mobile content and commerce services to millions of mobile consumers through India’s most widely deployed telecom applications cloud platform. Basically, a mobile VAS (Value Added Service) company which offers services life Astrology services, Music, Messaging on mobiles, SMS based applications & businesses, ringtones, caller-tunes, games, contests, similar services on landlines, etc. They found 197 is a directory enquiry service number of BSNL and finalized with name One97. In 2013 ”One97” listed in innovative 100 list.
After “One97”, Vijay launched PayTM. Initially with four team members to launch the mobile and commercial site. They worked for safety to maintain all privacy and data. Gradually they update their service through customer reviews. Finally, in August 2010 they launched www.paytmonline.com. PayTM means pay through mobile.
With the use of PayTM you can recharge or pay all your bills from anywhere. They have launched a toll free number “1800-1800-1234” for recharges followed by PayTM mobile apps. Within a year they earned clients like HomeShop18, DishTV, Snapdeal, etc.
There are 6 Million monthly users with 7 Million transactions takes place. PayTM gained 10 million mobile wallet users just within 6 months and have raised their presence in Africa, Europe, Middle East and Southeast Asia as well and also have regional offices in Mumbai, Pune, Chennai, Bangalore and Kolkata. They are choosing the mode of payment across major consumer internet companies such as Uber, Bookmyshow, Makemytrip. In 2012 PayTM was identified by ‘Most Innovative Start-up of the Year’ at the Entrepreneur India event arranged by Franchise India.In 2014 PayTM identified by Top 50 Brands at celebration by Paul writer. In 2015 PayTM Wallet received the “Best Digital Wallet Award”. An Alibaba Group affiliated, The Ant Financial Services Group announced signing a deal to purchase a 25% stake of One97 Communications in February 2015. Ratan Tata, an Indian entrepreneur and chairman, retired of Tata Sons, invested in One97’s Paytm in March 2015.