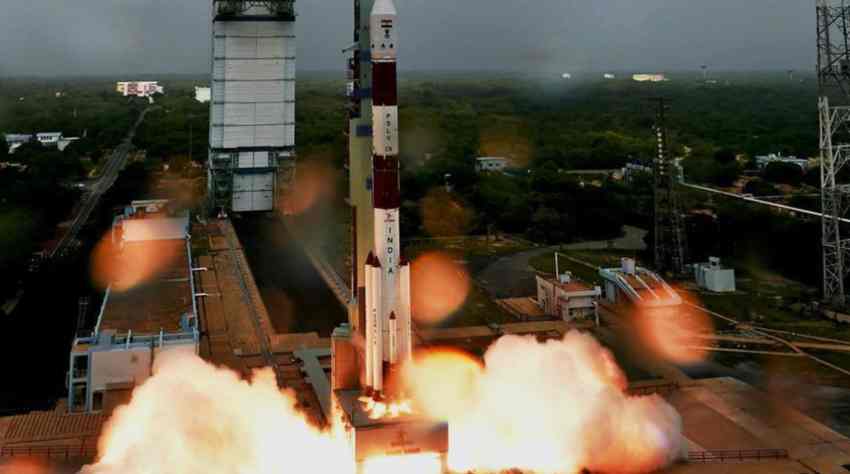 India scripted a new chapter in the history of space exploration on Wednesday with the successful launch of a record 104 satellites+ by ISRO’s Polar Satellite Launch Vehicle (PSLV) in a single mission.
PSLV-C37 carrying the 104 satellites lifted off from the first launch pad at Satish Dhawan Space Centre in Sriharikota at 9.28am. It was PSLV’s 39th flight.
Seventeen minutes later, the rocket started placing the satellites into orbit, one by one with a time-frame of about 11 minutes.
Out of the total 104 satellites placed in orbit, 101 satellites belonged to six foreign countries. They included 96 from the US and one each from Israel, the UAE, the Netherlands, Switzerland and Kazakhstan.
PSLV first injected its main payload Cartosat- 2 series, India’s indigenously built earth observation satellite. It was followed by two other nanosatellites of ISRO —- INS-1A and INS-1B.
It then took less than 10 minutes for the rocket to spew out 101 passengers, which are all foreign nanosatellites, as it travelled up in altitude reaching the polar sun synchronous orbit.
Russian Space Agency held a record of launching 37 satellites in one go during its mission in June 2014. India previously launched 23 satellites in a single mission in June 2015.
ISRO chairman A S Kiran Kumar congratulated his team for the successful launch of 104 satellites. “My hearty congratulations to the team. The Prime Minister has conveyed his congratulations,” he said.
“We can hit centuries like cricketers’
Director, ISRO Satellite Centre Mayilsamy Annadurai said, “We can also hit centuries like our cricketers. In another two months, the number of satellites built by ISRO will reach 100. Besides GSLV missions, we have get Chandrayan – 2 ready for launch next year.”
Mission director B Jayakumar said the launch involved complex issues in management and maneuvering, “A great moment for each and every one of us. We have so far launched 226 satellites including 179 foreign satellites,” he said.
Director of the Vikram Sarabhai Space Centre K Sivan said it was the toughest mission they had handled. “We had to ensure they don’t collide,” he said.
“Last year we saw nine successful launches. This year began with a remarkable event. Congratulations to customers on placing confidence on ISRO’s PSLV,” said director of Satish Dhawan Space Centre P Kunhikrishnan.
All about 104 s atellites
Equipped with panchromatic and multispectral cameras, the 664kg Cartosat -2 will provide remote sensing services similar to that of its predecessors.
Images from the satellite will be used for cartographic applications, urban and rural applications, coastal land use and regulation, utility management like road network monitoring, water distribution, creation of land use maps, change detection to bring out geographical and manmade features and various other land information system (LIS) and geographical information system (GSI) applications.
INS-1A and INS-1B are versatile and modular nanosatellite bus system envisioned for future science and experimental payload.

The Rise of the Shaked Brothers

Need a New Business Idea? Dissecting the Old Ones Just Might Be the Key