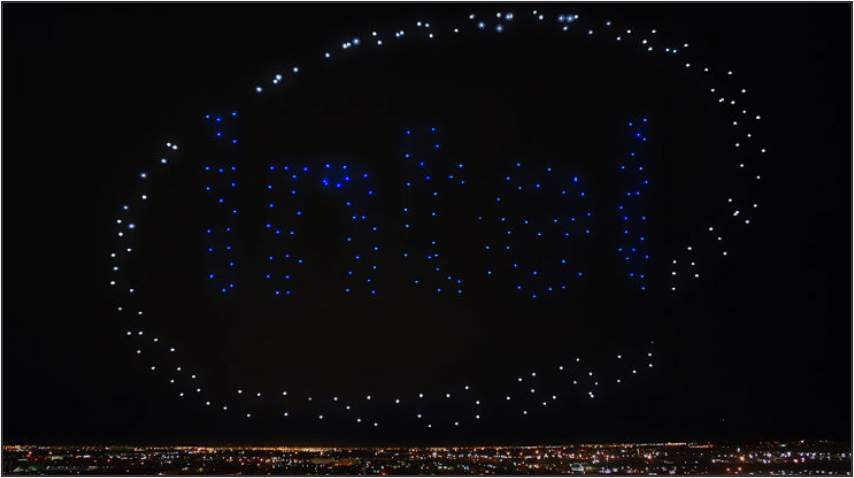 Intel supplied 300 of its drones to showcase a show stopping display at the Super Bowl 51. The half time show featured Lady Gaga singing “God Bless America” and along with Intel’s 280-gram quad copters synchronizing perfectly, creating a red and blue moving star formation; an American Flag; and a Pepsi logo followed by Intel’s logo at the end of the show.
The NRG stadium in Houston got to witness not just an historic comeback win for the Patriots over the Falcons, but also get to behold a mesmerizing display of Intel’s technological advancement.
The drones can fly for up to 20 minutes and needed a special permission from FAA. “This is the highest the Intel Shooting Star drones have flown,” Intel said in its press release. Intel claims that the Shooting Star drones can create over 4 billion color combinations in the sky, few of which were witnessed at the Super Bowl. The drones can fly at maximum speeds of 10 meters per second in GPS mode, while their maximum light show airspeed is 3 meters per second.
The catch here was that the display wasn’t live. Due to the unpredictable weather in this month and the hanging wind speeds, Intel shot the original display earlier in the last month. So the TV viewers get to see the display. “We’d hate to plan all this and, if the wind speeds are too high or if it’s raining and the roof is closed, no one can see this spectacular show. So our creative team as well as the Super Bowl creative team felt this would be best to be filmed.”, says Natalie Cheung, General Manager at Intel’Drones.
Intel also collaborated with FOX sports to give the viewers a unique field-of-vision perspective of the most-watched sporting event of the year, with its 360-degree replay technology at the Super Bowl. “Be the Player” enhancement feature, displays a POV perspective from any player on the field without ever having a physical camera attached to the player. Intel’s new tech was made in Israel by Replay Technology, bought for a reported $175 million in march 2016.

Most Successful Startups Founded by Students

Putting the “Silicon” in Silicon Valley

How UX Design Brings Value to the Business