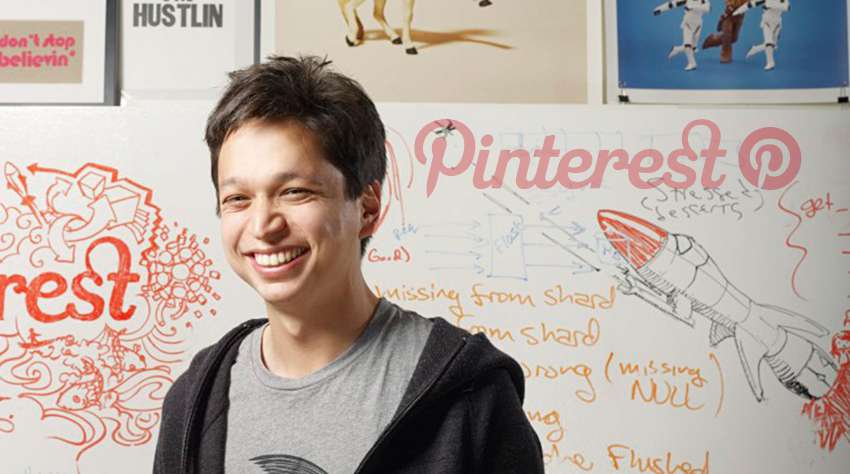 Pinterest, available in 22 languages and a home to more than 20 billion user-generated “pins”, the service’s version of posts, which are basically just images or videos users add to Pinterest with a link back to its source. It is one of the largest social networks online, dominated only by Facebook and Twitter.
A person who does not have a background of a website developer, has created one of the largest social networks online. Ben Silbermann, a political science student, who loved to collect things like insects and stamps has built a social online pin board for collecting, showcasing the images of their interest over the World Wide Web. Can anything be more inspiring than this?

Ben’s parents, Jane Wang and Neil Silbermann, are both ophthalmologists with a family practice, who’s based in his native city. Ben was raised in Des Moines, Iowa. He had a heart transplanted when he was in his junior years. Graduating from Yale College in the spring of 2003 with a degree in political science, Ben later become co-founder and CEO of Pinterest, a virtual pinboard which lets users organize images, links, recipes and other things.
Germ of the idea
Ben Silbermann does not have any technical background. But he worked for Google before he built the Pinterest. It was only after his graduation that he started taking interest in technology.
Ben is the mild-mannered man of tech. He is polite and sincere. Ben had the foresight to see what other tech companies could not see at the time when he started Pinterest in the spring of 2012, existing social networks, while letting users share information in just about any form. It became a household name overnight. He worked on the idea of company for a couple of years and then talked to his friends about it. He started the company in his apartment until he received his first significant backing from investors in the summer of 2011.
First stages of struggle
He worked for Google as an ad designer, it was there where he got an idea of doing something big. He had lots of ideas in his mind while looking at the people working in Google, but never got a chance to explain them as he was not having any engineering background.
To work on any new big idea you need to concentrate on that, forgetting everything else. Ben thought the same way and left Google. Then he talked to one of his friend Paul Sciarra about his idea and they started working together on his idea. Ben learned how to build iOS apps, and they started to build apps for iPhone. They built miscellaneous apps which were proved to be a failure. Only after this Ben got the idea of Pinterest. Ben says that if you bring something to this world, you want to see it get better and that is what always made him keep going, no matter what.
Success
His venture was an instant hit, not at the elite colleges and California coffee shops that often function as the Web’s proving ground for new ideas but by word of mouth in Ben’s home state of Iowa. Its iconic image-heavy grid and mostly mobile audience, became the characteristics that are now synonymous with the Visual Web, a collection of next generation apps that prioritize pictures over text.
What people do here on Pinterest is, they create and curate virtual boards of photos clipped from websites and other users’ boards, gathering up shots of lusted-after products and other stimulating images. When you log in to the Pinterest, you’re presented with a grid of new content that past activity suggests you might want to “pin” to your own boards. Ben describes it as a more interactive and social version of the lifestyle section of a newsstand, a place to find visually interesting, emotionally resonant content related to the stuff you love—and often want to buy.