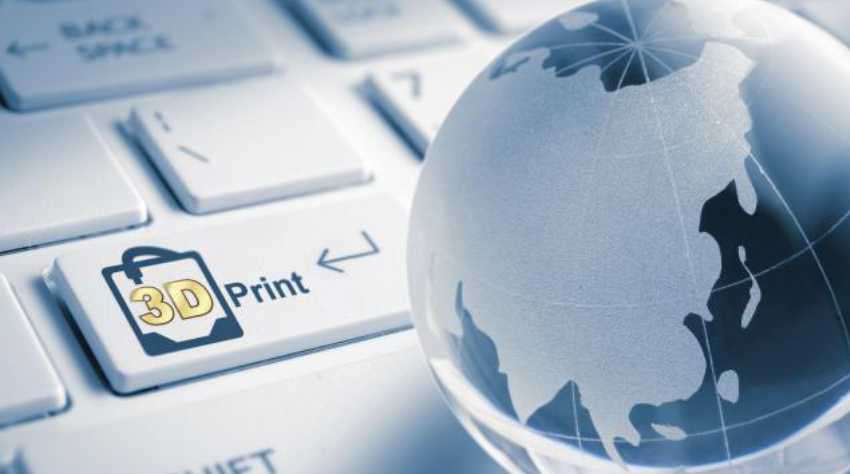 Imagine printing a new plate when a small kid in your house drops the good dishes. Imagine printing on a gift to every friend and family member on their birthday with your own hands. Imagine printing your favorite design or quote on T-shirt of your own. The world you are imagining right now is not here yet. But the way 3D printing is evolving and the kind of promises it is making, we are getting closer towards the better tomorrow.
3D printing, also known as additive printing, which transforms 3D models into solid objects by building them in layers. Since the invention of 3D printing, it has been used for rapid prototyping. However, in the recent years, it has started to evolve into a next generation manufacturing technique that has the potential to allow on-demand production of final products.
3D printing has been used in a wide range of materials including thermoplastics, thermoplastic composites, metal alloys, pure metals, ceramics, and various forms of food. Right now, 3D printing is an end-use technology, which is in its infancy. But when combined with synthetic biology and nanotechnology, 3D printing has the potential to change the face of the production industry into something better.
The Beginning
Rapid prototyping is not a novel technology. In 1960, Professor Herbert Voelker began taking into account different ways to use the output from computer designs in some of the automated machinist tools. His efforts used first real mathematical models and algorithms to describe three-dimensional parts. Today, for most design tools, that uses rapid prototyping, his work is a basis.
The step involved the creation of automated products by cutting away solid model based on the 3-dimensional design. This method continued for over a decade, until the mid-80s. Carl Deckard, a researcher came with an idea to print the object layer by layer. In 1987, the first commercial rapid prototyping machine came into service that used a layering technique. The technique is still in use, though it has been refined with the advanced  one.
The Principle
All 3D printers are based on the same concept. The 3D CAD drawings are sliced into layers ranging from 0.09 to 0.25 millimeters thick depending on being used. Different material and different binding processes are being used by different printers, but a powder of nylon, ceramic, and even metal is used as the base material in all printers to be fused together for the layers being created. The machine moves to the new layer after the completion of a layer, and the process continues. Material extrusion, binder jetting, powder bed fusion, material jetting, and sheet lamination are the 3D printing processes currently being used for different applications by various organizations.
More Than Just a Prototyping
3D printers were made to create prototypes and concept models, or maybe it was used only in rapid prototyping at the beginning. But 3D printers are now being used in many areas. One of the important use of 3D printer is the additive manufacture of production tools. 3D printers are now being used to produce low-run injection moulding in affordable cost which used to cost thousands of dollars in moulding patterns, jigs, fixtures and other tooling processes. Binder getting can be used to directly 3D print sand cast cores.
Another area where 3D printing is making significant changes is DDM (Direct Digital Manufacturing). DDM is the process of going to the final products from an electronic digital representation of a part. DDM is used to mould the final products in industrial sectors including aerospace, automotive manufacture, space, healthcare, toy making, designer goods, art-and-crafts, and fashion. We are starting to witness the significant changes that 3D printing is making in the industry.
Personal Fabrication
Personal 3D printing market is growing at a rapid growth, with over a millions of 3D printers are likely to be sold by 2020. The kind of products that can be fabricated at the current data are limited, but personal 3D printer has promising future waiting for. Despite being in the early stage of development, the 3D printers are fulfilling dreams of some enthusiasts. According to research, the 3D printer industry will be worth USD 1.1 billion by 2019 compared to USD 185 million today. The personal 3D printer available today has limited use and expensive, but in the coming years, personal 3D printers will allow mainstream consumers to fabricate every kind of products, making the standard of living more superior.
A Bright Tomorrow is Waiting
3D printing is moving in several directions and it will continue to expand in many areas in the coming years. Some of the promising areas for 3D printers in the future will include medical applications, customized consumer products, and custom parts replacement. Researchers have started to experiment with the idea of artificial bones with 3D printers. Many replacement organs can be created using 3D printers. 3D printing has great promise when it comes to the automotive industry. There are cars that have been printed with 3D printers. In the coming years, there will be a time when whole planes could be printed with the 3D printer on a larger scale. 3D printers may also be used to make future buildings for a real. There is a company in China that has created many houses using vast material extrusion 3D printer.
3D printing may not replace the traditional manufacturing completely, but it will affect many industries with the wide range of applications it has.
The technology is unpredictable and we never know how it will affect our lives.  But we can hope for the best of mankind.

Why Hiring a Lawyer in Accidents is Always the Best Option?

FFIEC Compliance and the Obstacles Introduced by the COVID-19 Pandemic: Do You Have the Wits to Adapt?