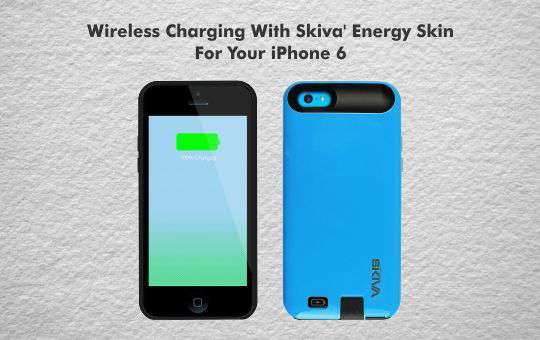 The most awaited feature of iPhone 6 wireless charging is here. Customers were really eager to get one, because of its convenience. Like all its major competitors having it Samsung also on the way to include it with their chief smartphones for several generations too.

No cables are the chief feature every person wants, here iPhone is giving this convenience to its customers. Only place your iPhone into a stand and have it charge instantly. But there will be a cable to the charger because it needs to be powered, of course, but it is what we want no cable to be attached to the phone. There will be no cable hanging to your table, but a nice cradle or charging pad placed on it.

It will be so convenient & easy that wireless charging mats are being installed at various public locations and stores. It will be so easy that only in the meanwhile you go through your file your smartphone placed on the charging pad, will likely have gained 50% charge or more.

Unfortunately, Apple fans will have to wait for a future iPhone 6 for this useful feature. But on the other hand, as the Apple Watch already including it, there are possibilities that the next iPhone will come with a wireless charger. Fortunately, the solution is already there in the market, Skiva EnergySkin, which will give your iPhone 6 the ability to charge without connecting it to anything.

The EnergySkin has come up with two very useful features, like, it not only allows you to charge your iPhone 6 wirelessly but the case includes a 3,000mAh battery so it doubles as a portable battery charging case too, which supplies to you an additional 120% or so battery power – in other words, if your iPhone battery dies, you can use the EnergySkin to charge it to full, and then again to another 20%.

But EnergySkin is not going to let you use one of Starbucks’ wireless charging mats. Instead of inductive charging, the EnergySkin uses two metal prongs at the base of the case to touch contacts in the charging dock.

The best thing is that you don’t have to waste your time around the charger to see if it is properly charged or not because the contacts in the dock are large enough to charge it properly. But without the dock, you will not able to charge it wirelessly, not on any Qi wireless charging pad like many of the iPhone’s competitors.

All this clearly means that it is an immensely convenient device. Instead of a trailing open-ended cable, it’s compact and looks far better on the desk. The EnergySkin charges via USB and its retractable 80cm cable help keep things neat. Already there is an optional Apple Watch charging stand available the market.

The charging case is a superb device. Because of its flexible rubber surround that fits snugly around your device, it is really easy to install and remove your iPhone in seconds.

There’s a micro USB port at the base of the case given if you’re away from your desk. Pressing a small button on the rear next to four battery level indicator lights, you can activate the battery to charge your iPhone 6. There is only one problem with it that, this button is too small and hard to depress, particularly if you’re facing your iPhone 6 with the button on the underside.

The EnergySkin’s headphone jack is big enough for a majority of 3.5mm mini jacks to pass through it without requiring an adaptor plus the case is the same size as most of the other battery charging cases.
The EnergySkin is a great bit of kit for its cable-free charging only.