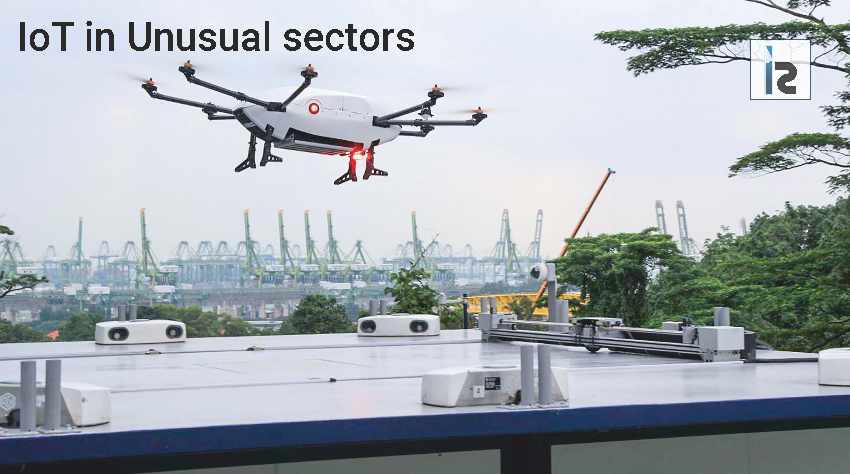 Generally when we think about applications of IoT, our mind travels to the things that we see around us or those that we utilize ourselves. Say industrial sector, banking sector, health care industry, automobile industry, home security systems etc. But there are a few sectors that have benefitted from the implementation of technology more than those known to us commonly. Let us have a look into these sectors.
Quick Recovery from Natural Calamities
 Natural calamities have long lasting effects on lives of affected population for many days after the occurrence of the devastating calamity. But since a past few decades, IoT has changed the scenario quite a bit. Earthquakes, forest fires, tsunami are few among the many natural calamities that are prone to occur in certain areas of the earth more than the others. Using the intelligence of the IoT, smart sensors are implemented to keep record of the changing behavior of land, water, wind and fire.
Sensors are directly connected to the smart devices that have access to the updated information about the weather conditions. If the predictions are too dangerous compromising the survival of the residents in any particular area, government as well as private associations volunteer to help take effective measures. Also, drones are sent to the affected areas to drop medicine and food packages. After all, security of life on the earth is above everything else.
Improvement in Agricultural Output
IoT based smart farming has tremendously improved returns as compared to the conventional methods as the quality and quantity of the crops produces has enhanced noticeably. The embedded sensors map the ground water levels and predict the rainfall so that prior care is taken to manage water if it’s in excess or in surplus. Also the processes involved in farming are performed using drones and robots. The agro machinery also has been revised a lot and is designed performance oriented. This has facilitated the outcomes of the farming sector a lot.
There are sensors installed on the cattle to monitor their health conditions, to locate them, to keep track of their milk production as well as to keep check of their pregnancy if applicable. Also for the crops or plants that require the green house plantation, using the information from the installed sensors, the caretakers are informed about the temperature, pressure and humid conditions so that measures can be taken in case of worsening situations to avoid loss and destruction of the crops.
Enlightening Unprivileged Population of the Country
Even after industrialization and urbanization in so many cities all around the world, the majority of the population still resides in the rural areas where all the new released tech and products from every sector take years to reach. Implementation is not even in the picture. Before the birth and spread of IoT, it was very difficult to reach to these people because person to person marketing is not convenient and practically possible with such less urban population as compared to rural population. Since the launch of smart phones at such cheap deals, it has become really convenient to target any population just at a click from your system.
Also, many regions have come out in the open due to awareness created through social site and programs. In the past few decades, many rural areas have been provided with basic necessities such as electricity, water, food and clothing. Education is the next most influential factor that is progress of implementation. Healthcare, nutrition, farming facilities, telecom, web and other related things which are casual daily facilities that are relished in the city lights are now being made available to the rural population. In a way the miseries of the people suffering from insufficiency of knowledge as well as facilities are decreasing with increasing spread of IoT.
– Namita Patil

5 Steps to Start an Online Business

5 Tips for a Smooth Move Overseas