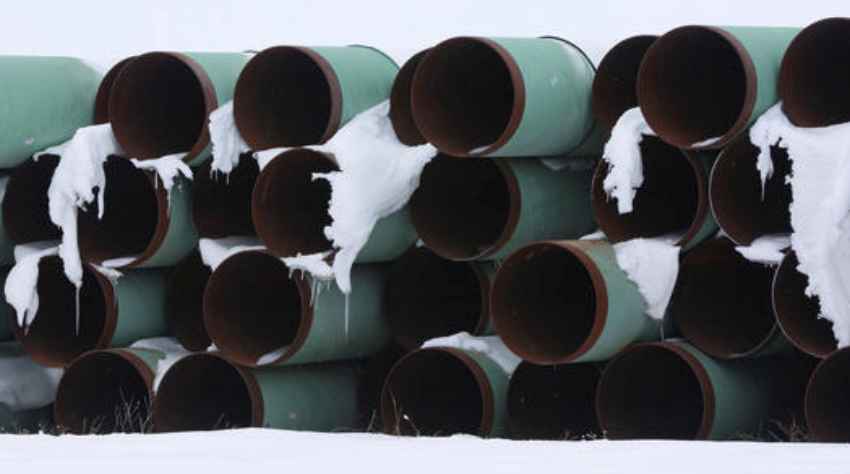 The Keystone XL oil pipeline is no more required to be made from US steel, despite an executive order by President Donald Trump days after he took office requiring domestic steel in new pipelines, the White House stated on last week.
“It’s specific to new pipelines or those that are being repaired,” White House spokesperson Sarah Sanders informed reporters on Air Force One when interrogated about a report by Politico that Keystone would not need to use US steel, despite Trump’s executive order issued on last month.
“Since this one is already currently under construction, the steel is already literally sitting there, it’s hard to go back. Everything moving forward would fall under that executive order,” Sanders added. The southern leg of the Keystone project is finished and started pumping oil in 2013. Some pipe segments that could be used for Keystone XL, which would bring oil from Alberta, Canada to Nebraska, have already been built.
Former Democratic President Barack Obama rejected TranCanada Corp’s multi-billion dollar Keystone XL pipeline, saying it would not benefit US drivers and would contribute emissions linked to global warming.
Trump’s order expedited the path forward for TransCanada to reapply to build the line. Economists told Reuters days after Trump issued the order on US steel requirements that it had many loopholes, would not be easily enforceable, and could violate international trade law.
Even if there were no loopholes, US steelmakers would get negligible advantage from Keystone XL, because they have limited ability to meet the stringent materials requirements for the project.
The office of Canadian Prime Minister Justin Trudeau said it welcomes the allowance of non-US steel, calling it a “recognition that the integrated Canadian and US steel industries are mutually beneficial.”
TransCanada told it was encouraged by the White House statement on non-US steel and that its presidential permit application on Keystone was making its way through the approval process.
Canadian Public Safety Minister Ralph Goodale said on Twitter that allowing non-US steel was “important for companies like Evraz Steel,” a local subsidiary of Russia’s Evraz, which had signed on to provide 24% of the steel before Keystone XL’s rejection by Obama.

How To Find The Right LMS Without Breaking The Bank

What Can Businesses do to Reduce Their Carbon Footprint?