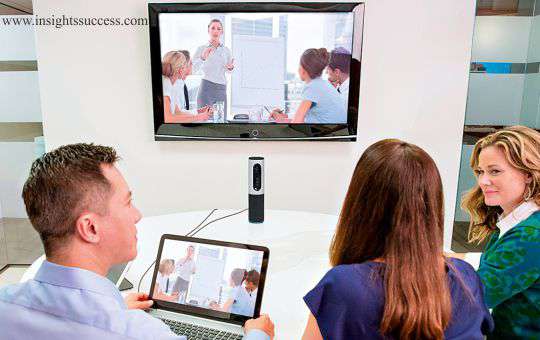 Just think about the man called CEO who is all the time out for meetings or for other reasons. How his company will go on? How he can manage his company in his absence? Here are the answers.
Mittu Chandilya, CEO of Air Asia India was having the same problem. So he had his office CCTV feed connected to his laptop & mobile phone real-time. Chandilya says, “In case there’s an emergency, like a fire, it’s good to have such weblinks built in to your gadget”.
Hectic traveling schedules of modern-day CEO’S put enormous constraints on their time. Though having so many problems, they have to manage their home offices and stay in touch with their direct reports. Instead of being busy CEO have to be in touch with the technology like — Video Conferences, Yammer, WhatsApp groups, Blogs, Employee Exchanges — is a must.
CEO Sandeep Chaudhary, At AON Hewitt Consulting, faced the same problem. He says, “I was in transit and by the time I came out, my leadership team had already taken a decision based on what I would have done, highlighting the thread of empowerment, a sine qua non to managing his workplace remotely”. Has six partners reporting to him directly and is in touch with them in myriad ways, including WhatsApp.
Janmejaya Sinha, APAC Chairman of BCG, says, “In an executive meeting, different members will be hit by jet lag at different times and so you need to be careful & alert and do things like eating sugar to stay awake, which is not good for you,”. The MIS built into Sinha’s laptop and phone throws up real-time regional data for him to chew on while on the go, but he is not on social media.
He says, “I’m not on Facebook, Twitter or LinkedIn, claiming the entire genre to be a “nightmare” that would require training. He heads 2,400 people in the APAC region and is accessible to them on official email & groups.
Niranjan Nadkarni, South Asia CEO of German testing, certification, inspection and training provider TUV SUD, strongly believes command centers. He says, “All our laptops have in-built cameras where we do video calls and strong CRM systems. The SAP system is built into the gadget for me to know my cash flows real-time.”
Another CEO, Ajey Mehta, MD, Microsoft Mobile Devices, India, uses his own company’s gadgets for accessibility, be it One Note, One Drive or Skype for Business. Mehta has special liking to One Note since it automatically synchronizes with his laptop or other surface he uses. He says, “I take my notes in the One Note software on the mobile, which automatically syncs with the cloud…the good thing is the entire history is also shared”.