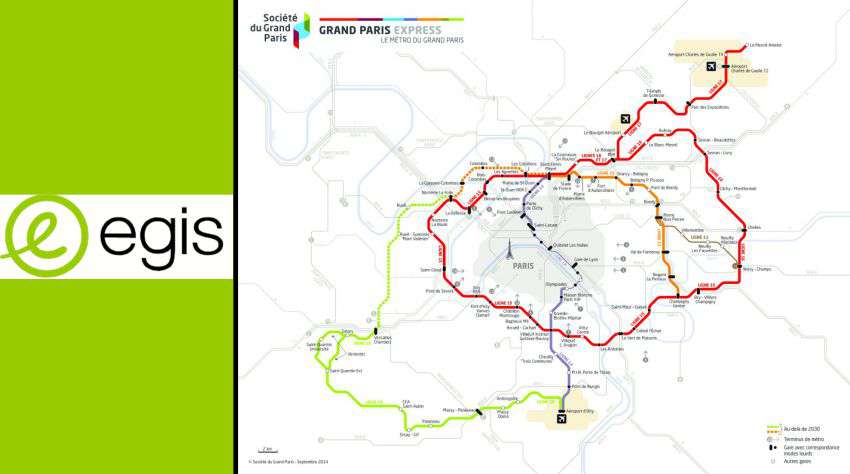 Egis has just strengthened its foothold within the Grand Paris public transport network by successfully bidding for the Engineering, Procurement and Construction Management contract (EPCM) for system equipment on metro Line 18.

The Grand Paris metro is one of the cornerstones of the Grand Paris building programme and of urban development in the Greater Paris region and its 200km of new track and 68 new stations will greatly expand the regional public transport network.

The future Line 18 will take passengers from Orly Airport to Versailles Chantiers station in just 32 minutes and ten new stations will serve some of south west Paris’ most strategic hubs.

It will have underground and elevated sections of 21 km and 14 km, respectively, crossing Plateau de Saclay and providing passengers with swift connections at:

– Orly Airport, via the extended Line 14 and the Airport’s own transport hub,
– Massy Palaiseau, via the RER B and RER C suburban transit lines, and numerous TGV high-speed train links,
– Versailles Chantiers, via the RER C line and the Transiliens regional train network.

Société du Grand Paris, the project owner, has decided to use automatic trains along the new line with the following technical specifications: steel-wheeled trains, 45 m long (possibility of extending up to
60 m) and 2.5 m wide, powered by a third rail. Each train will be able to carry 350 people at an average commercial speed of 65 km/h. A fleet of 30 trains will be needed to meet projected traffic demand in 2030, i.e., a train every 3 minutes.

A project with major technical and environmental challenges

Egis will be responsible for all of the systems along the new line as well as those in stations and at maintenance and operating sites. These include high and low voltage installations, platform screen doors and tunnel ventilation and guidance systems as well as automatic train control systems and centralized operational control rooms.

The challenges are enormous: the technical systems along the new line must showcase the technical excellence of the Paris-Saclay research hub and blend into their surroundings in an area where environmental issues are of paramount importance.

This new mission consolidates Egis’ relationship with Société du Grand Paris and makes it a key stakeholder in the biggest transport and urban development project in the Greater Paris region. As well as EPCM for systems and equipment along Line 18, in the summer of 2013 Egis was made prime systems contractor for Metro lines 15, 16 and 17 (in partnership with SETEC ITS), and for rolling stock maintenance and stabling facilities for Line 15, based in Champigny (in partnership with Richez & Associés).

In late 2014, Egis was awarded complete EPCM responsibility for the infrastructure of Line 16 (comprising 28 km of track and 14 underground stations) in two major lots:

Egis also heads up the QUAI #3 consortium (comprising Egis, Lowe Stratéus and bdcconseil) that was awarded the PMC contract to assist Société du Grand Paris in all of its communications activities. This contract, which runs from 2015, involves designing, producing and deploying all of the communication initiatives for Grand Paris Express i.e., corporate and project-related communications and building updates, as well as handling and tracking procurement and contracts for large volumes of supplies and services.

Oil Trades at Lowest Price in History, it fell to $0.01

A Beginner’s Guide to Casinos